When I went for my younger sister's wedding in April, one of my friend from Poland who was soo keen to see pictures of Indian wedding asked me to bring the wedding pictures,but since it was a quick trip the photographers pictures were not ready by the time I returned and later on my sister send the pictures my email. Few months passed by and I didnt see her till then, next time when we met, she asked me for the pictures again. I was quite surprised,I didnt expect that she was this keen to see the pictures, so I had to tell her that I dont have the soft copies,but then she was even ready to come home to see the pictures in laptop. About a month ago she visited us and I prepared lunch for her ,without knowing that she was an Indian food lover too ! she surprised me by saying that she has attended Indian cookery class and she knows how to prepare Madras chicken curry and few other curries too. She was totally thrilled to see the wedding pictures and our culture.What surprised me a lot was she is so keen to learn Kathakali ,kerala's own special art, and has even plans to go to kerala for that.One of her friend went to kerala and learned kathakali for 1 1/2 years and is performing a little bit of what she learned here !! Isnt it amazing ?? I couldnt even tell her I have never seen a Kathakali performance in real ,other than on TV.
Coming to the topic ,when she visted us she bought some home baked cookies for us, so yesterday she invited us to her place for lunch and I prepared this french yogurt cupcakes for her.I saw this recipe in Yummy o yummy first which she adapted from Look who is cooking too. Normally I dont like to experiment when I am giving it to others but the clicks in both the blogs attracted me a lot and gave me confidence to try it out.I baked the first batch 2 days ago which yielded 6 cupcakes.I thought of tasting one and giving other 5 for her,but we couldnt stop with just one,so I had to bake again yesterday morning .The second batch was even better,after her amazing Polish soup and bread she took out this cupcakes as dessert.
This cupcakes are so light and soft and even my hubby who isn't cake fan loved it.

Preparation
In a bowl beat sugar,eggs,vanilla extract and yogurt. Add flour , baking powder and mix well . Finally add oil and fold in .Line a cupcake tray and pour the batter . Bake it in a preheated oven at 175 degree centigrade for 20 -22 mins.
Sending this to Julies Christmas Delicacy at Erivum Puliyum 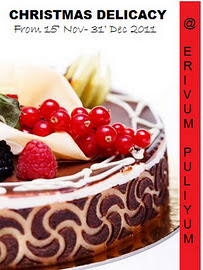 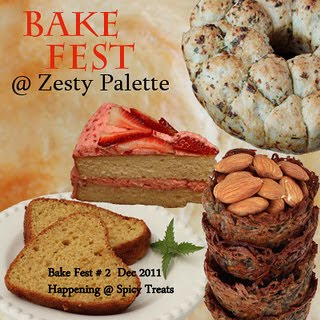 Posted by Vineetha Sush at 7:13 AM

Email ThisBlogThis!Share to TwitterShare to FacebookShare to Pinterest
Labels: cake

OMG, Is there any way to do same pinch over here? I just baked french yogurt cake :-). They are super soft and yummm.

Soft and delicious..now I am seeing this for the third time and it is tempting me a lot..adipoli aayitundu

Even without butter. it turned out fabulous!

Hey super aayittundu ketto...
Now these are tempting me to bake it..;)...

looks so spongy and soft...delicious cupcakes.

Very spongy n soft,yummy!!!
You can link this too dear..
Erivum Puliyum

cake looks super soft and delicious...wonderful recipe.. bookmarked!!
If you wish, plz link it to the ongoing event at my space..
Spicy Treats
Ongoing Event : Bake Fest # 2
Do participate in My 300th Post Giveaway

nice n easy cupcake :) haven't tried using yogurt in any, will have to check out on this..

This looks so soft and yummy!

The muffins look so soft , spongy and yum!

Those cupcakes looks so beautiful and golden. Well done!!

Thanks a lot for stopping by and leaving so many lovely comments!!

I am Also foodie and Love to Have Indian Cookies.. Definitely I will TRy this Recipe..
Indian vegetarian Recipes