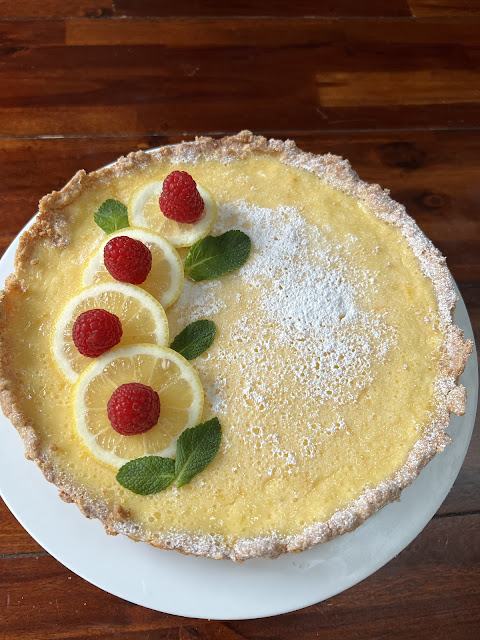 Cut the cold butter into cubes and keep it aside.

In a bowl measure the flour and add a pinch of salt.

Add the cold butter cubes to the flour and mix it in with your fingertips until it resembles bread crumbs.

Make sure your hands are not getting warm as butter needs to be cold all the time.

In another bowl mix egg yolk, milk and icing sugar.

Add this egg yolk mixture to the bowl of flour and with a spoon and roughly bring it all together to make a rough ball.

Tip it on the worktop and make a dough without kneading much. It is important not to over work the dough and to keep the butter cold.

Shape the dough into a disc and wrap it in a cling film and refrigerate it for few hours or overnight if possible.

Lightly dust the worktop and rolling pin with some flour.

Take a 9 inch tart tin and lightly grease it with butter.

Roll the disc to roughly 1/4 cm thickness and gently lift it and press it evenly on the tart tin and trim the edges.

Chill the tart tin in the freezer for about 30 minutes.

Remove the tin from the freezer and with a fork gently prick to make few holes on the bottom of the tart.

Line the tart tin with a parchment paper/foil or cling film and fill it with baking beans on top.

Blind bake the tart with baking beans at 190 degree C for about 10 minutes.

Remove the beans and bake the shell again for another 10 minutes or until its biscuity.

To make the filling break 5 eggs in a bowl, add sugar, lime juice and beat until mixed.

Finally add lemon zest and give it a mix.

Pour the filling on top of the shell and bake it in a preheated oven at 160 degree C for about 30 mins or until just set.

Allow it cool down and them remove from tart shell and chill it until ready to serve !

Posted by Vineetha Sush at 2:35 PM No comments: 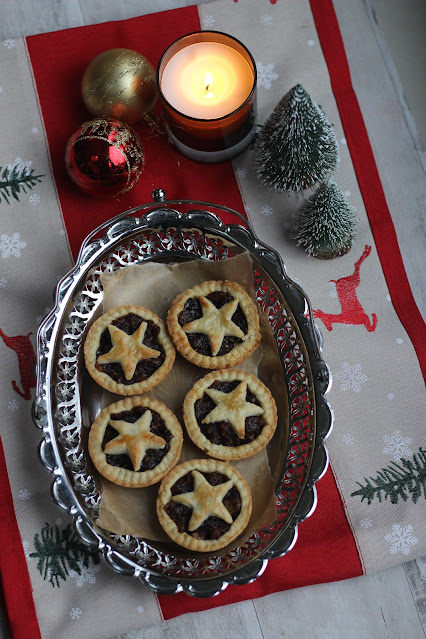 For the mince pie filling - (To make about 20 pies)

Orange juice from half of an orange

For the short crust pastry (to make 8 pies)

To make the mince pie filling place all the ingredients in a thick bottomed pan and heat on a medium flame until it boils.

Reduce it to simmer and cook for further 30 minutes until it thickens. Add more rum/brandy if required.

Let the mix cool completely and then transfer it into a glass jar and keep it refrigerated at least a day before making the pie. It can stay in the fridge for about one month.

You might be about to make about 20 minced pies with this mix.

Take flour, salt in a bowl.

Add butter and rub it with your finger until it resembles bread crumbs.

Add egg yolks, milk and bring everything together until it becomes a dough. Do not overwork the dough.

Chill the dough for about 30 minutes.

Roll the dough with a rolling pin on a floured surface and using a 10 cm circle cutter cut about 8 circles. Save the remaining dough and keep it aside for the lids.

Line a cupcake tin with the circles.

Scoop a tablespoon of the mincemeat filling into the pie cups and spread it evenly.

Reroll the remaining dough and cut out stars to make the top of the mince pie.

Bake the mince pie in a preheated oven at 175 degree C for about 17-20 minutes until golden brown.

Posted by Vineetha Sush at 9:23 AM No comments: