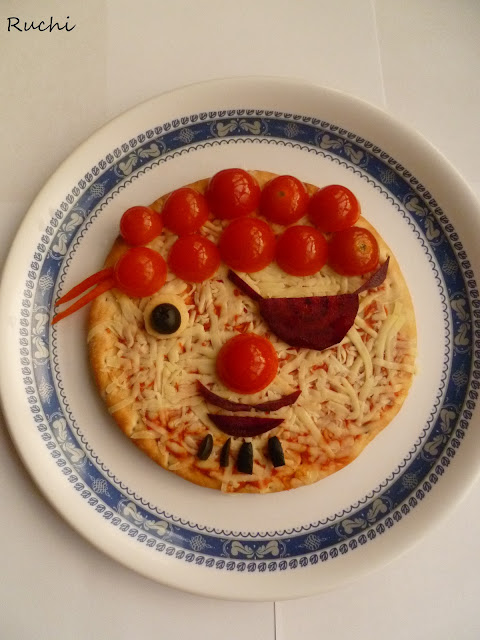 Lil A's nursery has a lots of cooking activities for children every term and this term they were learning all about Pirates. To make the topic more interesting they planned to do some cooking activities with the same theme too.Pirate boat sandwiches and Pirate pizza was the two things they choose.The teachers then asked the parents who are keen to cook to come forward.I have done cooking with them before and loved it,so decided to go this time too..but this time the things they choose was not easy as I did before. There are 20 kids in his class and making them roll the dough spread the pizza sauce ,sprinkle cheese and keep the toppings like this and then baking  20 pizzas in was impossible in 3 hours,so I decided to buy the readymade mini tomato pizzas and then just make them  do the toppings and then bake it. I did spend 2 hours in my kitchen that morning getting all the toppings chopped and ready for them,thinking that i will finish it way before the 3 hour target,oh boy I was wrong. I carried the pizzas and toppings to nursery that day and started calling the kids one by one .Initially they were all so eager to do the toppings but after a while some of them got bored,they wanted to go and play and some of them were fussy about the toppings ,they said they dont want tomatoes  or olives in their pizza !! Somehow convinced them that if they dont put those their pizza wont look like pirate.By the time i finished toppings and baking them it was nearly 3 and had only 30 minutes to pack the pizzas for them to take home and then to clean the mess ...phew it was quite hectic ! I cant imagine what would have happened if I took the pizza dough and sauce and made them roll their pizzas too..then only half of them would have got their pizzas on time :)
Ingredients
Cheese and toamto Pizza - 1
Cherry tomatoes - 6 nos(sliced into half )
Red pepper
Beetroot
Parnsnip
Olives
Method
1.Make the scarf  of the pirate with cherry tomatoes.
2.For eyes I used  Parnsnip and olives
3.For eye patch I used beetroot
4.For nose I used Cheery tomato
5.For moustache and mouth  I used beetroot .
6. For Beard I used olives
7.Finally for the scarfs tie I used redpepper/Capsicum
8. Baked them at a prehaeted oven at 200 degrre centigrade for 10 minutes ! 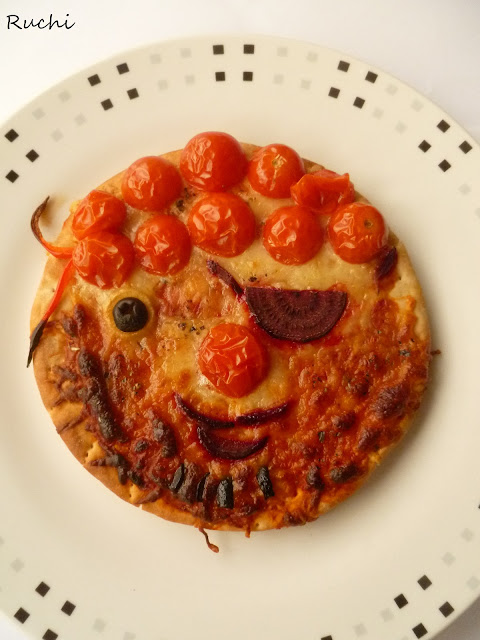 Posted by Vineetha Sush at 2:54 AM

This looks super cute :) and I can imagine how hard it would have been making kids do the deigns... i love the idea and I remember when I was a child I used to ask my maid to do cat dosa for me and I dont get what I want I wouldn't eat...:P

The pizza looks cute and inviting...

real pirates are scary but your pirate is so cute and handsome :)

That looks so, so.. cute, looks exactly like a pirate...

it is so cute!!! the most adorable cheesy pirate ever :)

I love reading about your experience when you help out in your son's school. Really innovative pizza pirate I must say! Cheers, Suchi

Cute looking pizzas...Making kids do a task esp the way we want is very tough...Appreciate u for completing the work in about 3 hrs...Great job..

Cute pizza .good work . First time your blog am following u . Glad if u follow me back

that is soooooooo cute...I love it!!